Being homeless is a challenge that nobody should have to face. But unfortunately, it’s a predicament that many people find themselves in each and every day. Thankfully, organisations like Whitechapel Mission are committed to providing invaluable support to every homeless person who walks through their doors. After finding out more about the incredible work the Mission does, the Deltra team knew they wanted to get involved.

The team decided to set themselves a series of challenges throughout the year to raise £4,500, the total needed for Whitechapel Mission to create a new computer suite for their visitors to use. The biggest of these challenges was the Three Peaks. If you don’t know, the Three Peaks challenge involves climbing the tallest mountains in England, Scotland and Wales, all within a 24 hour period.

After months of planning, training and preparation, the day of the challenge arrived. Eight brave members of the Deltra team, armed with their waterproofs, rucksacks and snacks, began the first leg of the challenge from Ben Nevis in Scotland. Once they completed this peak, they then made their way onto Scafell Pike in England and then to Snowdon in Wales, before a long drive back to London, 24 hours later.

When they call it a challenge, they aren’t overreacting. Not only did the team have 23 miles of walking, a 3064-metre ascent and endless hours of driving to contend with, they were also met with bad weather. This made the challenge that much more difficult. But thanks to their drive and enthusiasm, the team’s morale wasn’t dampened too much. They motivated each other, particularly when anyone was struggling and there was plenty of laughs along the way, even as they made their way through the rain.

Unfortunately, despite their best efforts, the team were unable to safely complete Snowdon, the final peak of the challenge, due to torrential rain and flooding of the streams along the route. The weather became so bad that even their waterproofs began to fail during the ascent. The team didn’t want to admit defeat and carried on walking for as long as they could through storm-like conditions. But as it became more severe, the safest option for everyone was to call off the last part of the challenge. 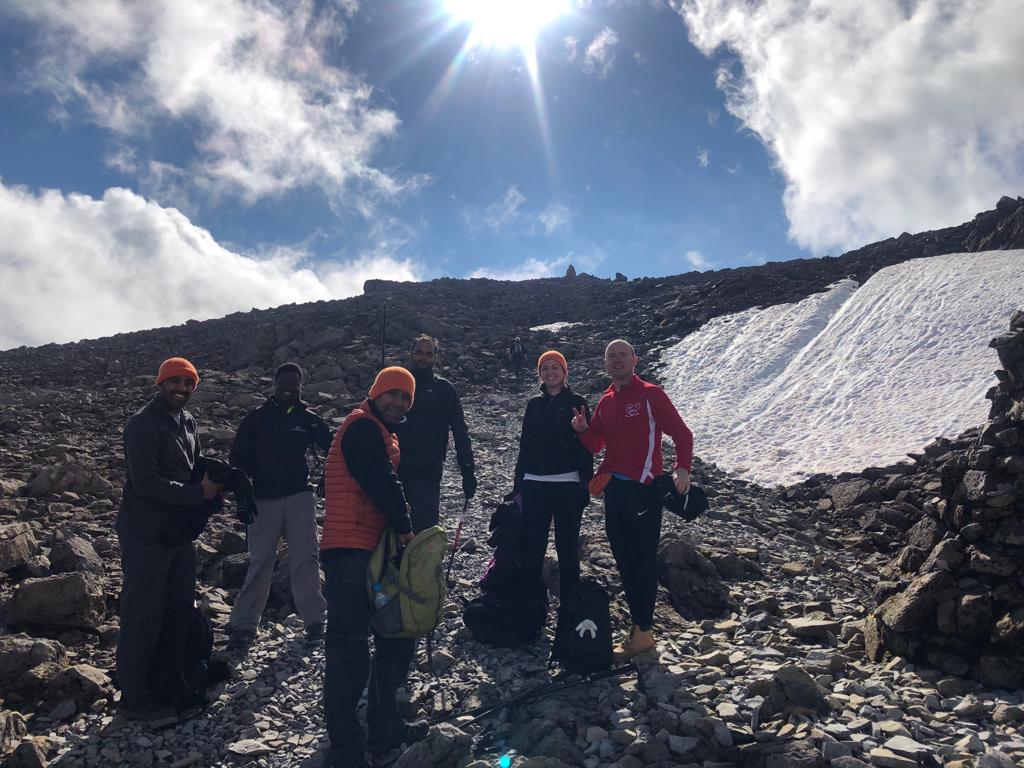 The team were extremely disappointed to have not been able to complete the challenge in its entirety. But it’s not all doom and gloom. Thanks to the kind sponsorships of family, friends, clients and candidates, we’ve managed to raise a whopping £2,240 for Whitechapel Mission. This is a fantastic amount that will go towards the creation of their new computer suite and help to transform the lives of potentially thousands of homeless people who visit the Mission each year.

But we’re not stopping there. The three peaks challenge may be over, but we’ve already started planning our next challenge, so we can continue working towards our £4,500 target. We’ll be sharing more news about this soon!

Here’s what a few members of the three peaks team had to say about their favourite parts of the challenge and why they decided to take part:

“I wanted to take part because I really wanted to give something back to such a great cause. There was also a sense of desire to take on the Three peaks and do it so I was motivated by my own ambition to tick it off the list. The best part was actually the interaction with the rest of the team. We got to know each other better and also help and support each other.” Minesh Jobanputra, Managing Director


“I am so proud of myself and the team for completing Ben Nevis, it was so fulfilling to reach to summit. The views on the way up of the Lochs and the highlands were incredible! It’s pretty impressive that despite lack of sleep, exhaustion and grumpiness from being so soggy, none of the team snapped at each other once. We all pulled together and really helped each other through the climbs.”  Tasha Hawthorn, Consultant “There were two reasons why I took part in the Three Peaks Challenge: first of all we are raising money for Whitechapel Mission. Being able to raise money for this charity and knowing what the money will specifically go towards drove me to take part in the challenge. Secondly, I like challenging myself. This was a challenge that seemed daunting but the idea of pushing myself (against all odds) to climb the three highest mountains in the UK was irresistible.

The best part of the challenge was reaching the top of Ben Nevis. It’s a tough climb and the weather extremes between the bottom and the top of the mountain made it even harder. However, the sense of achievement that I felt when we reached the top was indescribable. Overall, it was a challenge worth doing. Not only was there a sense of personal satisfaction in attempting this great challenge but also the satisfaction of doing this within the Deltra team. The camaraderie was great and we definitely bonded more through the process.”  Gurdeep Sahota, Consultant

“Taking part in The Three Peaks Challenge was a lesson in climbing, courage and cramp. My favourite aspect was definitely reaching the summit of Ben Nevis. Not many of my friends can say they’ve climbed the tallest mountain in the UK and led the group from the front I might add!. The worst bit was certainly the weather for mountains 2 and 3. I took part to raise some money for a great charity, and to prove a point to myself and the rest of the office – and I’d like to think I succeeded on all fronts.” Sam Temperton, Consultant


“The reason I took part was to attempt a brutal fitness challenge, but also to raise money for Whitechapel Mission. If people can sleep rough in the middle of winter, the least I could try and do it climb a mountain in extreme weather conditions!” Emma Riches, Consultant

We’d really appreciate it if you could help us reach our target by donating what you can towards our effort. Whether it’s a £1 or £100, every donation can make a huge difference to the people Whitechapel Mission help each day. If you’d like to donate, you can visit: https://uk.virginmoneygiving.com/Team/DeltraGroup.