Insights from our Change Management Event

From gaps in performance to new technology, there are countless reasons for businesses to launch transformation programmes. However, even with the best intentions, business transformation initiatives can be notoriously difficult to get off the ground. Despite the challenges, some organisations have and continue to go the distance successfully, with fantastic results. So what is it that they’re doing differently?

This question was one of the main discussion points at our latest change management event, with Gosia Walendzik, an experienced Project & Change Management consultant who is currently Lead for the London Chapter of the Change Management Institute.

We created this event to act as a forum, where attendees could openly share their experiences of change management, both good and bad, whilst also giving them the chance to learn from Gosia’s expert insights into change management. As recruiters of change professionals, it is also vital for us to continually develop our understanding of the current challenges being faced. The event sparked interesting conversations with those who deal with such challenges every day.

During the event, the group unanimously confirmed that change management is a key difference between successful and unsuccessful transformations. Empathy and consideration for those impacted was also found to be crucial.

Gosia explained that to successfully implement a change of any kind, the leaders within the organisation need to both identify the need for change and to communicate it down to their employees. If the latter doesn’t occur, high levels of resistance can be expected and this can quickly spread throughout every tier of an organisation. In fact, many change experts have cited a lack of communication around the change as a primary factor in why so many change initiatives fail in the early stages. 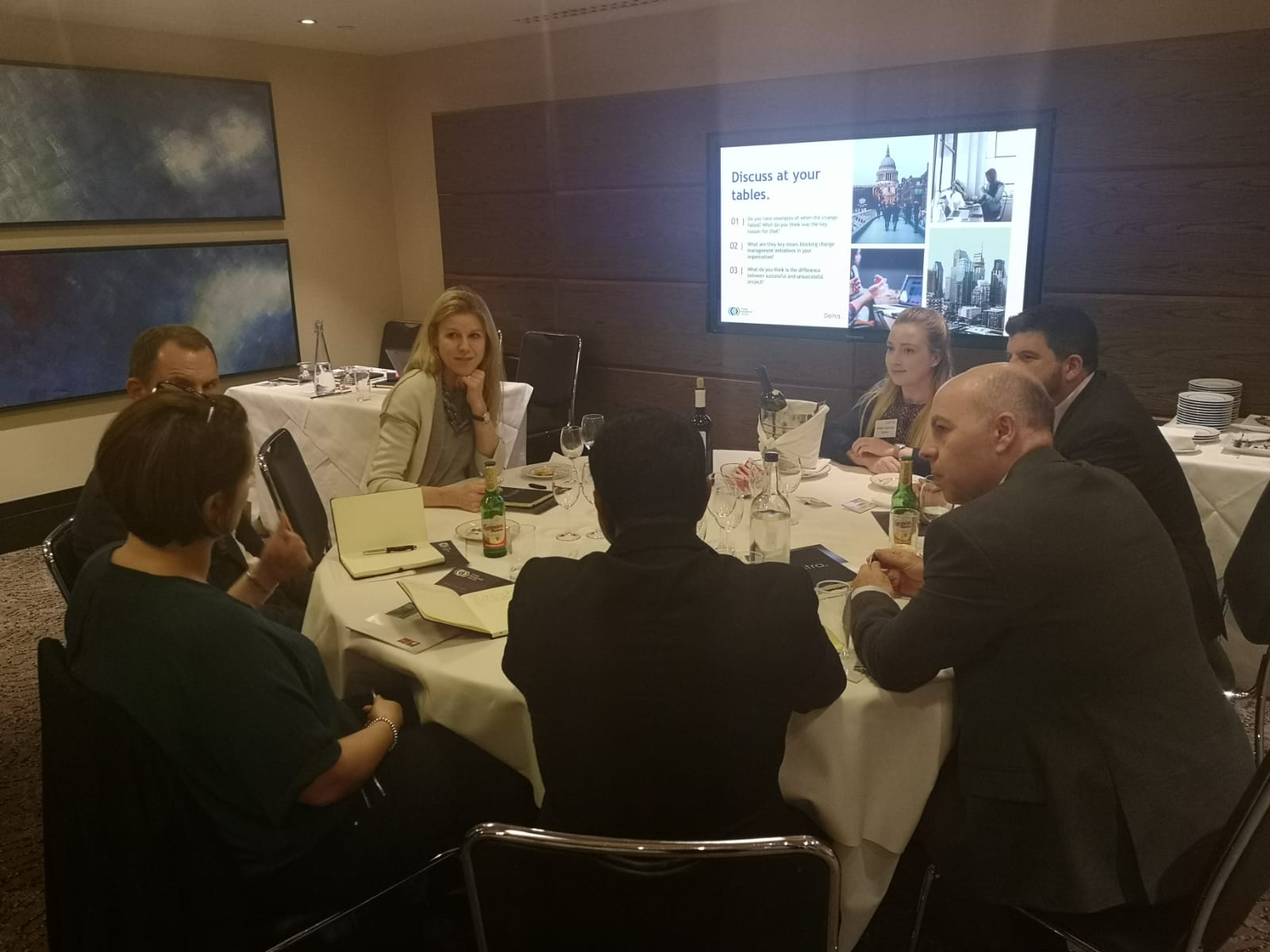 To further explain the basic human reaction to a change which has not been communicated effectively, Gosia used the simple example of stealing a pen.

“When someone steals a pen from you, how does it make you feel? Regardless of background, experience or gender, if a change, even one as small as losing our pen, is imposed on us, we all have a similar type of reaction, be it anger or upset. We then need time to re-establish ourselves and progress through this transition.

In organisations, a change manager can help to encourage acceptance of the change early on by explaining what part each team or employee will have to play in the planned change. This gives the employees a purpose and they can then share their experience of the change, such as losing their pen, with their colleagues to remove all shock and confusion from the equation and makes acceptance more likely.”

The underlying reaction to a change is the same (to varying degrees) across most scenarios.

After discussing the need for Change Management, and some effective techniques, we split into break out groups. Each group consisted of a mixture of change leaders and delivery leaders. Gosia asked the groups to collectively answer a series of questions about their experiences with change - the key reasons behind project/programme failures, and the differences between a successful and unsuccessful project, for example. The opportunity to share experiences and lessons learned provided an insightful portion of the evening for all.

As our attendees shared their stories, we heard a mixture of opinions on the causes of failed transformations. Some suggested that inadequate support from superiors and/or sponsors was a contributing factor, while others felt that insufficient planning was to blame. In each of their examples, it became clear that, despite the varied transformation programmes and organisations/industries, a lack of clear change communication was a recurring theme.

The point was also raised that employee feedback should be taken just as seriously as the initial explanation. One of our guests outlined an experience in which they were sent emails explaining an upcoming change within their organisation. This seemed to be acceptable, but the lack of follow-up to ensure that the email had been received and understood caused an issue. By taking the time to collect this feedback from their employees, the organisation could have expected better clarity for all, and subsequently lessened resistance.

This attendee felt that if the feedback were to be not only collected but used to influence the implementation, organisations can show their employees that their thoughts are being considered and acted upon. She also added that employee involvement helps to build trust for future transformations.

Employee empowerment was something that most guests felt could be better implemented (or used on a wider scale) in order to achieve a more successful transformation landscape. One attendee said that immediately imposing change onto teams without any consultation can be detrimental. 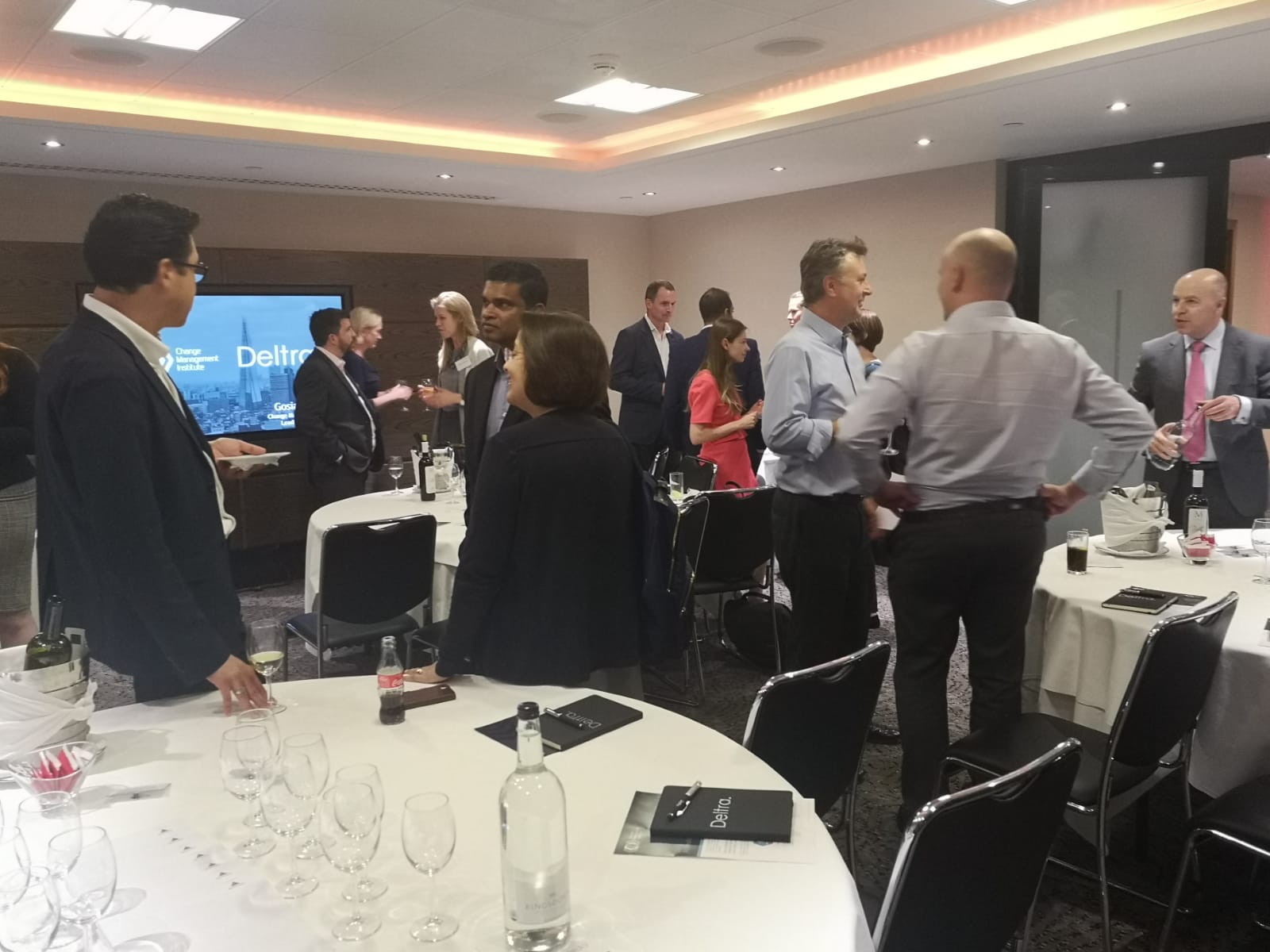 Individuals within an organisation should feel confident enough to find their own solutions and to share opinions on any issues that will directly impact them. A solid support structure is necessary to facilitate this, in addition to compassion from organisational leaders and executives from the early stages and continued throughout.

We saw some fantastic discussions between Gosia, the Deltra team, and our attendees throughout the evening and we all left with plenty of new ideas and perspectives. The overarching message throughout the whole event was that people should always be at the forefront of any change, and that empathy and understanding go a long way in securing an enabling environment for change.

If you’re interested in learning more about our upcoming roundtable events, don’t hesitate to get in touch or by calling 0207 375 9500.

From the Experts Deltra Events